The third year has begun with the introduction of three different routes for design. The real which deals with full on design for manufacture, the right which deals with more creative solutions with an eye on eco-design and the possible which deals with highly creative designs which may be too blue sky for manufacture for the time being. I feel that the right design seems most appealing to me as I don’t think I would want to become a boring designer who created boring and uninteresting pieces of work which no one would care about. At least I think this is the case, though it does concern me that my skills within product design may in fact lie within the real, not the right. The final decision was difficult to come to, however I feel that it reflects what I want to do…

In the right group, we will be having tutorials with Bethan Gordon. I am quite happy about this as I felt that the project Beth ran last year was really enjoyable and so I am hoping that with her as my tutor for this project, I should be able to push the boundaries of my design. Our first tutorial was an interesting one, I feel that my initial idea has been diversified into a far more interesting topic of research and design. Where In was originally going to focus on cycle helmet design due to the lack of cyclists who wear helmets in the city, I have now decided to work on the broader topic of cycle safety in general. Beth advised that I broadened the scope of my project and I am no going to start work on researching  cycle safety in general. I want to find out what […]

During this past week, I have been looking at a lot of cycle accident statistics, which seem to have pointed out to me what the main problems that are afflicting the cycle industry. I have come to realise that city cyclists have a tendency to have more accidents, mainly due to the larger number of cyclist in the small space of a city. Overall, I have found that men between the age of 36 and 45 are the most likely demographic to have a fatal or serious accident. It seems that approx 75% of fatal and serious accidents occur in an urban area, where 75% occur at or near a road junction,  80% during daylight hours and approx 75% of cyclist killed have a majors head injury. http://www.rospa.com/roadsafety/adviceandinformation/cycling/facts-figures.aspx#references I have also looked into the most common injuries that occur, finding that Limb injuries such as arm and leg injuries are […]

We had our second tutorial group meeting yesterday. I feel that once again I have a direction to work in and something to improve on. Beth has advised that I observe some road junctions to see the problem first hand and to confirm the problems my secondary research has identified. I plan on focusing on the infamous Crwys Rd / City Rd / Albany Rd / Richmond Rd / MacKintosh Pl junction which many people in Cardiff regard as dangerous. I must also make contact with some local cycling groups and ask for their feedback on the matter as first hand experiences will be invaluable to my research. I must also ensure that I make no assumptions about my market or anything relating to the product. Beth has advised that we identify a persona which effectively describes our target consumer. I also went through my brief with Beth, who explained […]

Yesterday I observed the heavily congested road junction between Crwys Rd / City Rd / Albany Rd / Richmond Rd / MacKintosh Pl between 10am and 10:30am. I found that a lot of the secondary research I had undertaken was confirmed, especially the problem associated with HGV’s and buses. In total, I observered 6 cyclists, 3 of which wore helmets. I have identified the following: – HGV’s leave little room when turning left – Cyclists often race off from junctions to get across before traffic catches up to them – Cyclists usually used the allocated lane in front of the traffic to ensure they set off first – Buses often maintain a constant speed, with little care to the danger of junctions – A large proportion of cyclists take chances by weaving between traffic in order to get out of a busy queue – Cars and Vans often disregard the law and […] 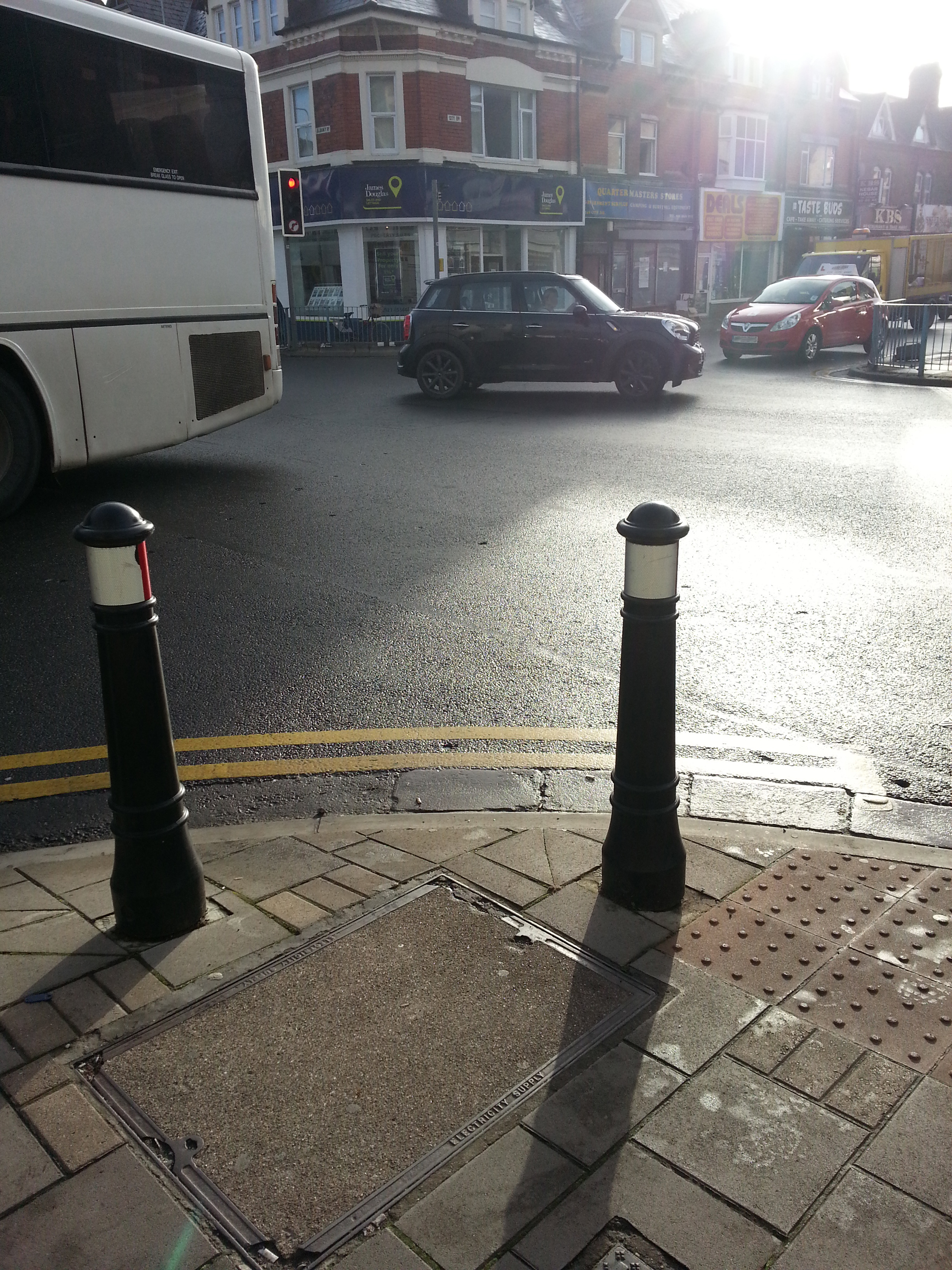 Today, I have undertaken research at the same junction, yet at the earlier time of 9am where I feel I managed to get a better look at commuters. Overall, the road was very similar, though of course a little busier. I was also able to photograph some of the problems I identified yesterday, which I feel proves at least some consistency, as the same problems recurred! In total, I was able to observer 5 cyclists today, 2 of which were wearing helmets and 3 of which were wearing clothes that made them visible to other road users. Today however, I also discovered some cyclists who were putting themselves at risk by having an incorrect road position in their lane, which poorly showed other traffic their intent – the cyclists in question stayed to the far left of the lane, then at a T-Junction turned right. The cyclists were lucky not […] 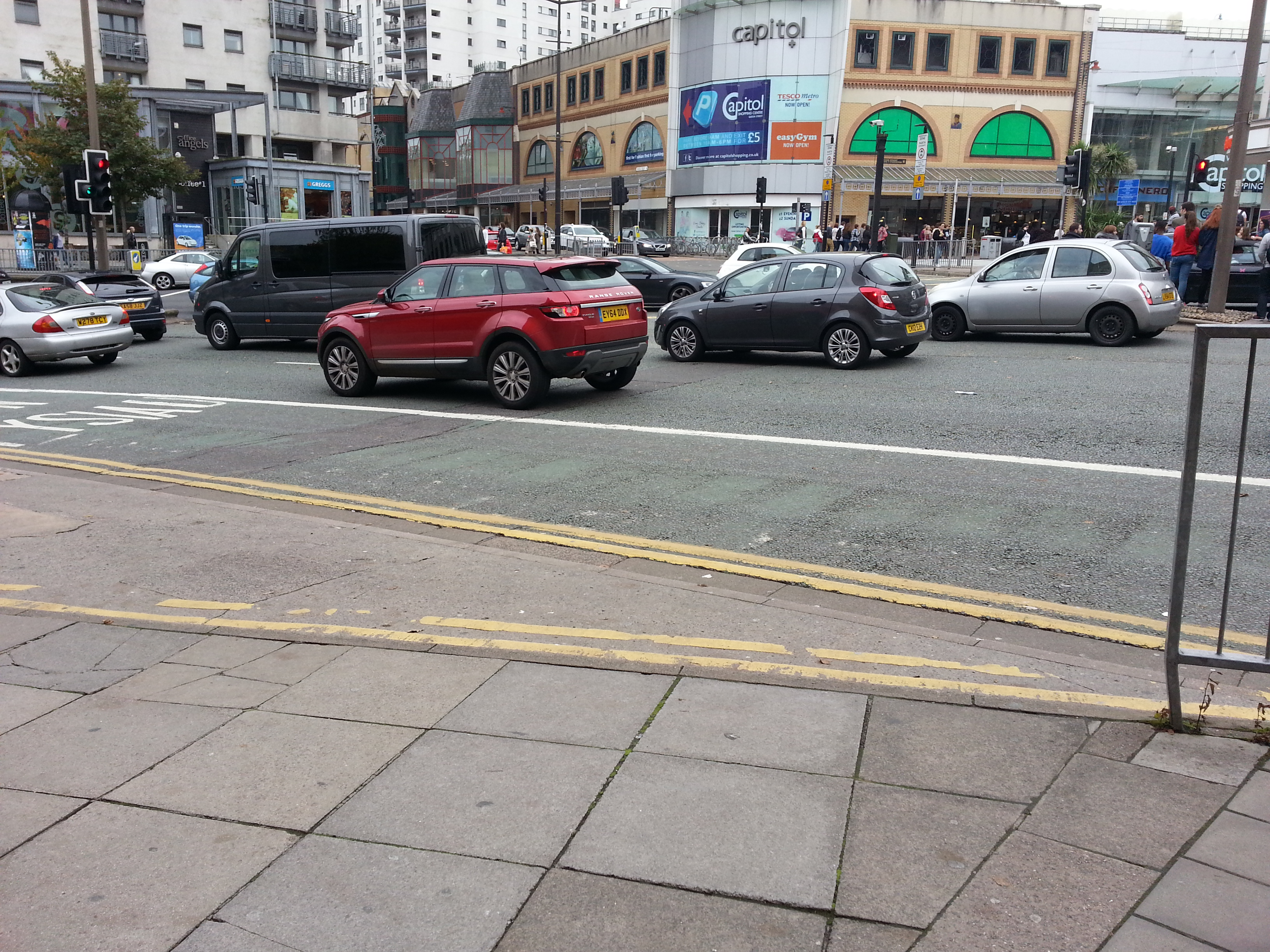 I have undertaken a wealth of research this weekend, looking mainly at road junctions again. Fortunately, a friend was able to help me get a third person perspective of a cyclist undertaking a multitude of manoeuvres across the incredibly busy Crwys Rd / City Rd / Albany Rd / Richmond Rd / MacKintosh Pl junction. Through this video work, I was able to confirm many of the dangers I had already identified and it was interesting to get a viewers perspective of someone cycling across with confidence. I was also able to undertake research where Richmond road connects to Newport Road, a popular student route from university to home. The traffic was very different in this area and the added fact that this was Saturday afternoon meant that the roads were extremely busy with shoppers. I encountered many drivers who were knowingly doing wrong by positioning their cars in cycle lanes and […]

In our third tutorial, we undertook an interim Viva presentation. I was happy to be able to present my work so far and was looking forward to getting feedback on what my tutorial group thought about my project. I feel my presentation went well, although it was pointed out that I did accidentally block one side of the screen during some of my presentation. After my presentation, we discussed my project further. I have decided that due to my feedback I should write a schedule of all actions I want to undertake so that I can make sure I meet my expectations and the deadlines. One member of my group advised I discussed the matter of local accident statistics with the police, whilst another pointed out that I should ascertain what initiatives the council had in place to make cycling safer and more accessible. Beth has advised that I analyse […]

Today, our group met up again to discuss where we were at and what we still had to do by our next tutorial. James thankfully was happy to sort out the session, taking notes and ensuring everyone was paying attention and helping out. Since the meeting I do feel like I haven’t done what I wanted to do this week, though I feel I will have the work done by the weekend. I have however completed a survey which I have issued to multiple Facebook groups, had shared by many people and sent to multiple cycling clubs. The feedback is coming in steadily, but I feel like I have already attained some really useful personal feedback, as well as validation of a lot of the research I have been doing. Overall, I am quite happy with where my project is at the moment, all I need to do now is to […]

Today I have finally made a decision as to where exactly my project is heading. I have written a more on-depth product design brief and from that, I have written a Product Design Specification – PDS. My new brief is as follows: To design a device for both novice and professional commuter cyclists which solves the need for a more effective way for cyclists to be seen and understood by other road users. It must help to ensure cyclists feel safer on the road ad for drivers to feel more confident that they can see the cyclists, understand the amount of space they require and also understand their intentions. The design must be capable of withstanding the wet weather conditions that cyclist’s encounter, as well as the common forces applied to the cyclist and their bike due to road conditions such as bumps and pot holes. The device, if powered, […]